The situation seemed so bad that members of a Facebook group started asking questions like: Guys, is everything OK with the Internet? I’ve been trying to post a story on Instagram for a couple of hours now.

When this happened, the Facebook newsfeed was flooded with questions, appeals and complaints. It seemed that the world would collapse if we didn’t have anything to scroll down for a few hours. But, of course, nothing is actually that simple. US’ “Wonghaus” claims that this outage cost them more than USD10,000, and for more examples of the related impact on various businesses and promotions, click here.

Let’s imagine for a moment a hypothetical situation where you (if you are a SoMe professional) or your client have a highly important appearance on a national television. You will inform everyone about it via social media, perhaps you will live stream it, or record and then post a behind-the –scenes video… and then Facebook and Instagram, your only social media for advertising, go down. Your only social media, period. You are not able to inform your followers even through a simple post, and ads that you paid for keep running without anyone to actually see them.

We have insufficient digitalisation of companies, government bodies and institutions on one hand, and those who identified digital presence with the two largest, definitely strongest, but not the only social media platforms – Facebook and Instagram – on the other.

Although advertising and presence on these two SoMe platforms are most profitable, with the highest feedback, number of people and interactions, relying only and exclusively on Facebook and Instagram is simply – short-sighted.

This also refers to all the influencers who have a fan base on one SoMe platform only. There is a picture saying “Imagine they delete Instagram and you’re not a model anymore.” massively shared on the Internet and it seems that nothing is truer than that. But it does not relate to models only. Anyone planning to build solid presence needs to think beyond Facebook and Instagram, at least in some future strategic plan.

Facebook and Instagram are the same company, that’s why we’re analysing them together. If one disappears for good, it is likely to bring the other one down, too. We live in the digital era that has been changing so quickly that sometimes it seems impossible to keep up. Thousands of new apps and hundreds of new SoMe platforms emerge every minute. Truth to be told, many of them are short-lived, but in a myriad of O.G. giants such as Twitter, LinkedIn, Reddit and others, people are increasingly using Tik Tok, Snapchat and YouTube for several hours in their everyday life. Growth of other SoMe and advertising platforms such as Quora, Tik Tok and Snapchat should also not be ignored. 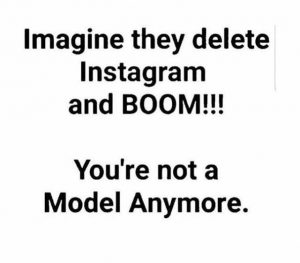 Naturally, we always pay attention to a specific target group we address, and perhaps those are not the kids who hang on Snapchat than on Facebook and who prefer using YouTube to get informed instead of typing in a questions on Google. But soon – perhaps in a few years – those kids, who may not be interesting now, will become a dominant target group and we mustn’t let it catch us off guard. So far, Instagram has been the strongest platform among them, too, but in a case of the permanent outage of Instagram, where would you address them?

Although this is the biggest Facebook and Instagram outage so far, we can’t ignore their relevance and unrivalled dominance. Perhaps the smartest move after all is to be present on other platforms as well, in case of the worst scenario possible but, at the end of the day, the main question is: Would you survive if there was no Facebook and Instagram tomorrow?

The blog post author is a philology student who accidentally entered the digital marketing world and decided to stay there. Known among colleagues as someone who always hums all the songs heard in the open space office. Obsessed with cats.